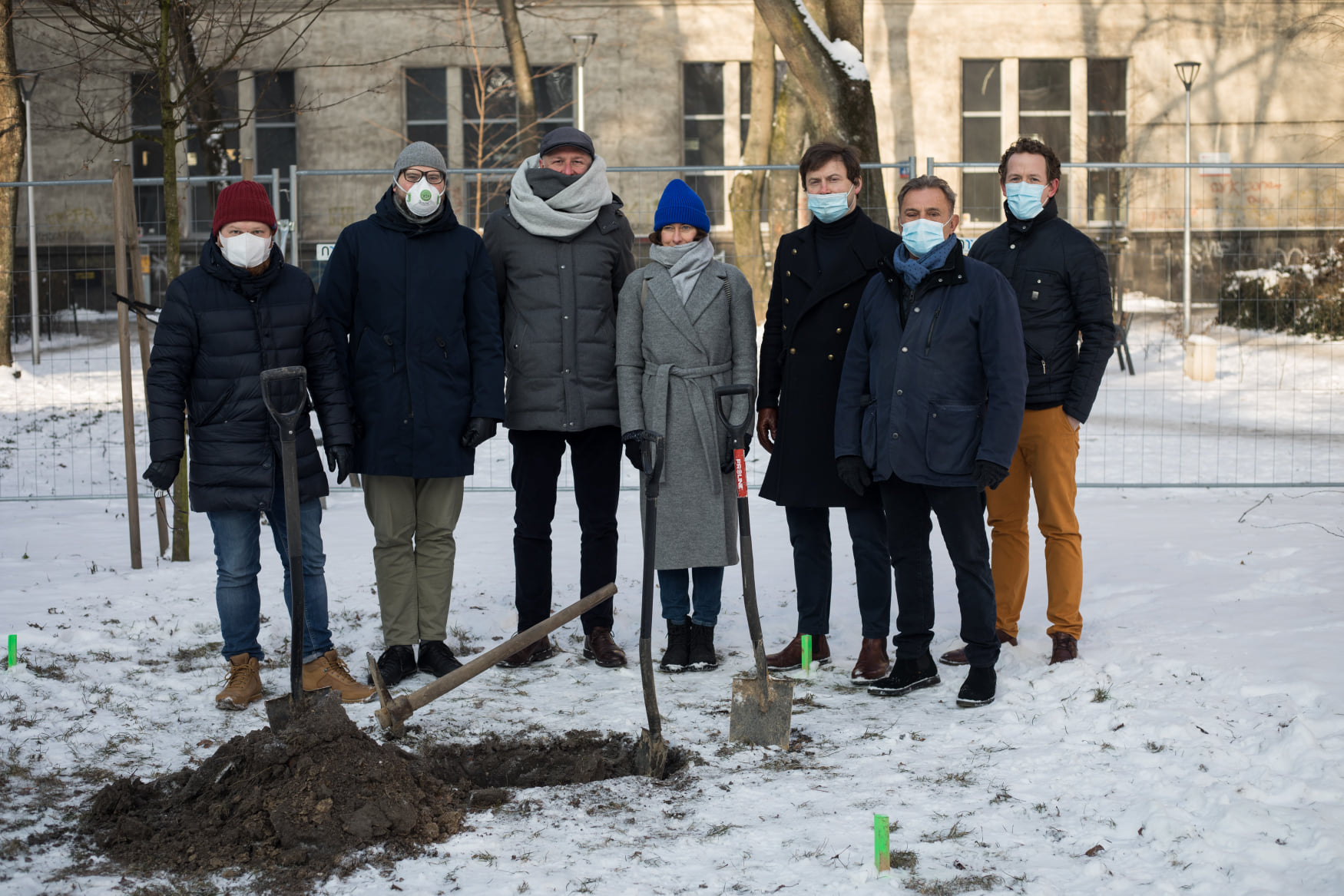 Representatives of the Association of the Jewish Historical Institute of Poland, Stacja Muranów and the Social Committee for the Commemoration of the Ringelblum Archive during the groundbreaking ceremony which symbolically marked the beginning of the Commemoration's construction.

The Underground Archive of the Warsaw Ghetto (also known as the Ringelblum Archive) is an invaluable collection of documents about the extermination of Polish Jews. It was created by the Oneg Shabbat group, which in Hebrew means “the Joy of Shabbat”. This clandestine organization was created by Dr. Emanuel Ringelblum with the goal of documenting the lives and deaths of Polish Jews during the war.

The Archive was buried in two parts during the summer of 1942 and at the beginning of 1943 at 28 Nowolipki Street in Warsaw’s Muranów neighbourhood. Part of the Archive was later found in 1946, and the rest in 1950, thanks to the efforts of three Oneg Shabbbat members who survived the war.

Since that time, the Association of the Jewish Historical Institute of Poland has been the guardian of the Archive, which is entrusted to the care of the Emanuel Ringelblum Jewish Historical Institute. This priceless collection contains over 35,000 pages of documents, including journals, letters, drawings, and photographs, among other items. For many decades, the Archive has proved a vital resource for researchers, and when the Institute opened a permanent exhibition in 2017, awareness of Oneg Shabbat’s work also grew among the general public.

At that point in time, however, there was still no formal commemoration of the heroes of Oneg Shabbat, and their work, in the city of Warsaw—their hometown.

In 2010, inspired by a lecture by Prof. Jacek Leociak, two designers set to work creating the Ringelblum Archive Commemoration Monument, to be built where the Archive was buried and found. Łukasz Mieszkowski and Marcin Urbanek, along with the group of activists, established the Public Committee for the Ringelblum Archive Commemoration and began preparations for construction. The Association for Social and Cultural Initiatives Stacja Muranów joined the project in 2015 and was later joined by the Association of the Jewish Historical Institute of Poland in 2020.

Stacja Muranów and the Public Committee for the Ringelblum Archive Commemoration conducted administrative activities in the Wola District Office. The Association of the Jewish Historical Institute of Poland was responsible for the fundraising for the building of the Commemoration and for its coordination.

The 78th anniversary of the Warsaw Ghetto Uprising is one week from today. On April 19th, the Commemoration will be presented to the residents of Warsaw, thanks to the support of more than 40 donors across Poland and worldwide. Due to the pandemic, we won’t be able to organize an official ceremony, that’s why we invite you to watch a special video presentation marking the completion of the Commemoration, which gives you the chance to hear from the originators, creators and executers of the project.

To see the video presentation, please follow the Facebook pages of our organizations, where the video will be released on Monday, April 19th.

We hope you can join us online next week.

The Association of the Jewish Historical Institute of Poland

The Association for Social and Cultural Initiatives Stacja Muranów

The Public Committee for the Ringelblum Archive Commemoration