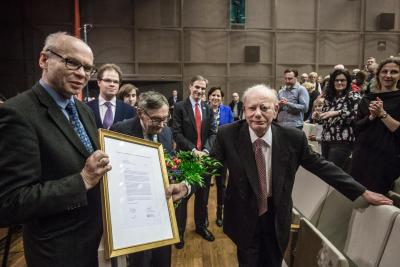 Last weekend the POLIN Museum was filled with music and numerous people who came to the first edition of the POLIN Music Festival Roots’n’Fruits. Some of the world-known artists appeared on the stage, just to mention a few, Martha Argerich, Michael Guttman, David Krakauer, Jing Zhao and Sinfonia Varsovia. The main idea of the project was to bring together the composers, artists and the audience in order to explore Jewish music and it’s various forms. During three days of the festival there were four concerts and over twenty artists performed.

The inaugural concert was dedicated to Sigmund Rolat, POLIN Museum Distinguished Benefactor and its great friend. Mr. Rolat supports numerous cultural projects in Poland, especially in Czestochowa, his hometown. Sigmund Rolat is a great music lover. In October 2009, thanks to his engagement it was possible to organize the “Music for a Beautiful World” a benefit concert of Joshua Bell, the world famous violinist. All proceeds from the concert supported construction of POLIN Museum core exhibition. It was the largest fundraising event in the history of the Museum project.

During the inaugural concert Dariusz Stola, the director of POLIN Museum and H.E. Paul Jones, the US ambassador, spoke of Sigmund Rolat with the words of recognition, respect and friendship. Marian Turski, Chair of POLIN Museum Council and the Vice Chair of the Association of the Jewish Historical Institute of Poland, talked about Sigmund’s Rolat enormous commitment and contribution for the Museum. The audience gathered in the auditorium honoured him with a standing ovation.

I’m extremely moved by the fact that I can be with you tonight. In this incredible, outstanding POLIN Museum, which we consider our pride and happiness. Music always had a special place in my heart, along with my hometown, Czestochowa. I am proud of the fact that the philharmonic in Czestochowa is named after Bronislaw Huberman, world-known violin virtuoso, grand Polish Czestochowa-born musician. May this festival be an inspiration, as well as a feast of music and beauty for all of us.